If you've been on my blog for a few years (which is likely not the case but let's imagine it is, for ego's sake! :D), then you may remember 2016. On January 4th, I posted some resolutions, and then I started a year-long character blog that, I must admit, I never thought I'd manage to keep up with. I was late a few times, struggled for ideas some weeks, but in the end I succeeded.

And reading those 2016 resolutions over, one caught my eye:

So, I'm going to start talking about these beloved characters, and draw them, and share thoughts and ideas because, in the end, whether the book gets written or not is irrelevant: what matters to me is sharing my world, my headpeople, and, perhaps, get a novel out of it. The main idea is clear, the main characters too, all I need is to... write. Good luck to me XD

When I say my goal is to be read and enjoyed, I clearly mean it.

Hence why I decided to reboot this world-sharing tradition, yup in the middle of the year, and this time with a greater focus on specific characters and even that elusive novel-to-be. I need some order in the chaos and figure this would be a nice addition to the Patreon, where I post stories (and the occasional artwork and/or Blogger life post) that, though relevant to TAoS in some way, may seem a bit disjointed nonetheless due to a lack of back-information on everything. So, I'll run this directed Sunday Special alongside the stories' inspiration. What that means ought to be apparent at some point ;)

But first of all,

What's in that acronym, TAoS?

I use it every so often out of habit/ease, and got into that habit because I didn't want too much known about the novel itself. You live, you learn, and I've reached a point where (as I will state every so often) I just want to be read and enjoyed. I don't want too many plotpoints revealed, but at the same time there's a difference between knowing a book's end and reading it, experiencing the world, the characers, the emotions, etc. You may know how Harry Potter ends because you've seen the movies, but it'll still have a very different impact to read the books and get into the characters.

So: TAoS refers to the novel's title, which is The Age of Silence. If you've checked the Patreon page, you'll have gotten an idea of what the story's about, namely:

The Age of Silence follows a young Syrilae girl known as Aneskia in her quest to right a terrible wrong that has befallen her home. On her way she will meet unlikely friends and lethal enemies, while her very existence unravels with seemingly every step she takes.

With madness closing in and threats revealing themselves to her new-gained senses, will Aneskia find a way to mend what has been broken? Will she rise beyond herself and find the strength to oppose the growing darkness? And who, among all foreign faces she will meet, will side with her when the time comes to make the hard decisions?

The plot in itself I shorten to this: it's a story about Love, Sacrifice, and Death. These words hold a lot more meaning than readily apparent. Today, I will be discussing Love. Love is an emotion I sought for a long time. It used to be a blinding form of madness that, in time, I recognized for what it was. Nowadays Love is peace - it's calmness, comfort, un long fleuve tranquille. I used to resent the peace because I'd put it in my mind that love was supposed to be something powerful, something that tears at your heart and strengthens emotions 'til breaking point.

I may no longer feel that chaotic form of love myself, but I experience it every so often with my characters. In most cases, Love is exactly what that quote states. And Friendship can be a subdivision of this Love. 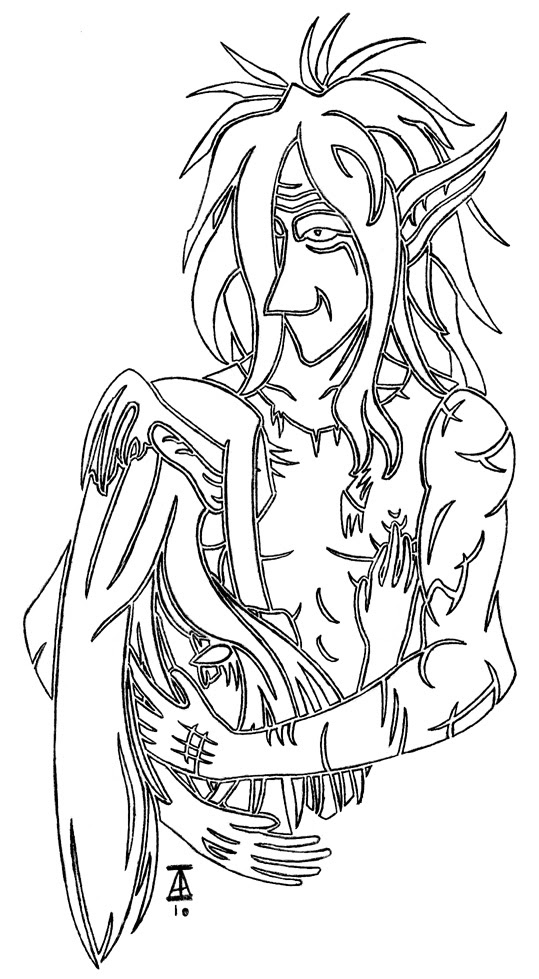 "Two Solitudes that meet, protect, and greet each other" - that is exactly how I would describe main protagonists Aneskia, young Syrilae girl, and Nalyn, old Elshir warrior.

The idea for TAoS has been with me since 2011, and has evolved a lot since then. The main event that sets it in motion, which is hinted at in this first chapter rough draft, has remained the same. Funny thing is, though I knew Aneskia would be its main protagonist, I'd had no idea at the time who to place on her path that may become that needed protective force. I ran through my vast catalogue of characters and debated the situation with some (yes, I'm that kind of writer), until I managed to answer the pretty vague question of 'who do I have for whom it'd make sense to be in the area at the required time?'. The day I thought of Nalyn, everything clicked.

Two extremes - a fragile child whose childhood has been over-protected, and an old man who's only known hardship since the day he was born - meet through chance, through danger, and eventually tame one another through mutual grief: both have lost everything they've ever cared about. Aneskia has lost her mother, her friends, her home, while Nalyn has lost the only love he's ever known. Though their personalities are polar opposites - Aneskia is a fearful child with no knowledge of the outside world, Nalyn has seen and done enough to despise the world and himself - they will travel together, seeking answers to certain events in their lives.

Most other characters they will meet have known the loss of loved ones. Among others Devon, a Vampire with close connections to the Syrilae, whose greatest loss was Ansai Nefahtil's daughter Selessannea and, mere years later, both of Selessannea's own daughters; and Kristofa, a Syrilae man who knew Aneskia's mother Niskania all too well. Love is as much a driving force as it is an obstacle, sometimes even a threat. For some, love is a madness without a cure. But whatever a character's relationship with love, be it grand, excessive, or vastly non-existent, all are driven by it in some way.

And Aneskia, whose source of power is unconditional love, is the glue that holds the entire story together. She is the voice of emotional reason, who'd rather give a murderer a second chance than condemn them outright. As TAoS will advance, that unconditional love will be tested until only one question remains: is the life of one worth the deaths of thousands more?

And on that note: stay tuned for part 2, Sacrifice, next week Sunday, same Blogger channel :D

Enjoying the world of Aeyuu?
Please consider Supporting me
on Patreon. Thank you ^^
Posted by Nocturnaliss at 4:51 PM